Archery GB have this week awarded Nonsuch Bowmen the On Target Performance specialism.  Specialisms were developed so that AGB could recognise clubs that work hard in specific areas of the sport in order for the sport to grow.

Congratulations to Amie who won Spelthorn Barebow with a score of 694 and achieved a MB score and her third Master Bowman score to confirm the classification achievement. 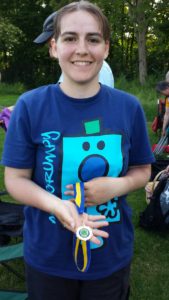 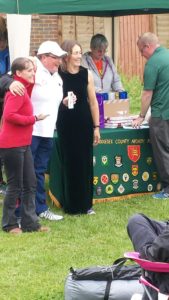 Well done to Amie and Linda for last weekends competition shoot at Middlesex.

Results are as follows:

*one of these may actually be silver, formal results will confirm when available

Quite a few of Nonsuch archers took part in the event – organiser John Pettet was helped in the planning by our field specialist Dave Morris, and the Lord Paramount was our very own Secretary (and Surrey President) Les Bashford.  This must have spurred on a few of our archers, with some great results (full results on the CSAA website):

Linda Skeet: 3rd in County, Ladies Recurve (Linda would have been 1st in county Ladies Barebow if her bow had gone through the 10cm hoop!)

Well done everyone, maybe this experience will get a few more of our archers having a try at Field next year.

Congratulations to Linda and Dave, who successfully passed their assessment and are now officially Level 2 coaches!  This doubles the size of our Level 2 coaching contingent. We now have Andy, Bea, Dave and Linda at Level 2, Martin, David and Laura at Level 1 and Richard currently awaiting his Level 1 assessment.

Whilst the majority of club members were competing in our annual Club Championships on the 5th and 6th of September, we had one archer who was in Nottingham for the weekend competing at the English Archery Federation Championships for 2015!

Congratulations to Martin Creasey who is now the Compound (Masters), Champion of England for 2015.

On Saturday 5th and Sunday 6th September 2015, we held our annual Club Championships. Recurve and Longbow archers competed on Saturday, whilst Compound and Barebow archers waited to compete on the Sunday. Both days were also open to club members of any bowstyle to shoot Short Metric rounds in the afternoon.

A BBQ followed Sunday’s shooting, at which the results of both days were announced. Awards and Trophies were presented to archers by fellow club member and international GBR para archer Tania Nadarajah. Congratulations to the following Club Champions for 2015:

A big thank you to all who organised and helped over the weekend and made it such a great success! For more photos from the event, members please log in to view the photo gallery.

Lets do it all again next year!

The most recent bank holiday has been very productive for Nonsuch archers: we’ve had plenty turn out for maintenance (which by the way has left the field looking nice and tidy ready for the club champs), several archers travelled to York to shoot a Double WA1440, and another braved the “lovely” rain on Monday to shoot at Guildford.

A further congratulations goes to Linda for achieving her Ladies Barebow Master Bowman award! And a special mention also goes to our associate member Tania Nadarajah, who has been competing for GB in Donaueschingen, Germany for the World Archery Para Championships 2015, where she won GB a quota spot at the Rio 2016 Paralympic Games!

Congratulations to all for such a fantastic weekend of shooting!

#TeamNonsuch at the end of York Archery Society’s Double WA1440 with their achievements.

If you would like to buy a club shirt or other clothing, please click here for more details
Tweets by @NonsuchBowmen
Menu
Close